Marathon canadien de ski
(1967)
The annual cross-country ski event not to be missed.
Inducted in 1998

The Canadian Ski Marathon was created in 1967 by National Country Ski Team member Don Macleod, and a dozen other determined skiers as a Centennial celebration and as a way to expand interest in cross-country skiing. In 1968 the Marathon turned into a 100-mile, two day wilderness event which has remained the format to this date. The first CSM drew approximately 400 skiers but was eventually to grow to near 4000 skiers in the early eighties. The CSM has attracted skiers from every Canadian province and territory as well as skiers from the US and other snow countries of the world. It is the focus of winter for many skiers. For whatever the weather, whatever the snow conditions, the Marathon is held somehow, year after year! 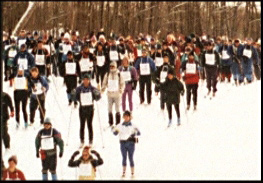