Born in Swiss, Paul d’Allmen moved to Canada in 1910. At the time and soon discovers skiingand the Laurentians. In 1915, he joins the war where he will suffer several injuries including a rather serious one to the legs. He is left with a serious handicap which limits his mobility. Nonetheless in 1931, he decides to try skiing again, at first he propels himself only with his arms but progressively regains usage of his legs. Paul always carries with him an assortment of maps on which he meticulously traces ski trails using compass, altimeter and whatever aerial photographs are available. At the same time he cleans the trails and opens new ones with members of the Alpine Club of Canada. Paul d’Allmen’s legacy includes six general maps covering all of the Laurentians and another 16 more detailed maps. He also mapped out Mont-Orford in the Eastern Townships and Mount-Royal Park in the heart of Montreal. 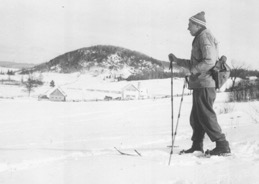